Ears on the Ground in Aberdeen

On accepting the Aberdeen mission, Johanna and I knew there would be plenty of ground to cover. From the very start we were keen to assemble a team of eavesdroppers; on site experts who would bring their knowledge of the local area to bear on the investigation.

Our initial endeavours in February 2017 had led us to several unexpected places. Perhaps the most surprising of all took place inside a luxury porta cabin. Growing up in rural Wiltshire, I had spent many school years inside poorly insulated buildings of similar ilk, this specimen was different, a cut above the rest. Inside, sitting around a table with Murray Dawson, it came as no surprise that this, if anywhere, was where one would find such quality architecture.

Murray is the founder and Chief Executive of Station House Media Unit (shmu), an organisation that is a core cultural hub for Aberdeen and at the forefront of Community Media development in Scotland. The ambition of the organisation extends well beyond the quality of their porta cabin. Since 2003 they have been supporting residents of the seven regeneration areas in the city providing radio and video production, print and online publications, music production and promoting digital inclusion. Their work also supports other disadvantaged communities and includes an employability and training programme for offenders, both pre-and post-release.

Despite having already walked extensively through the city, Johanna and I, so caught up in the energetic atmosphere of shmu, were completely swayed by Murray’s suggestion to take in the re-located and subsequently neglected Wallace Tower (or Benham’s Lodgings), St Machar Cathedral, Seaton Park the river Don, Old Aberdeen and the Brig O’Balgownie en-route back to the city, setting new records on our daily pedometer total. To regain our strength, we called in to the Brig O’Don pub for some much-needed shelter and refreshment. While regaining our strength, one of us was amused to find that some TripAdvisor users rate the Brig O’Balgownie as average, claiming ‘it is just an historic, picturesque old bridge’.

On returning to Aberdeen in early April, members of the youth media group from shmu, a highly motivated and well-skilled team of radio and print media experts ranging from 12-19 years in age, form our first team of eavesdroppers. Well versed in researching and presenting content for their weekly radio shows, the ability of this group to hold a collective silence, extend the reach of their aural attention and draw sonic events truly exceeded our expectations. 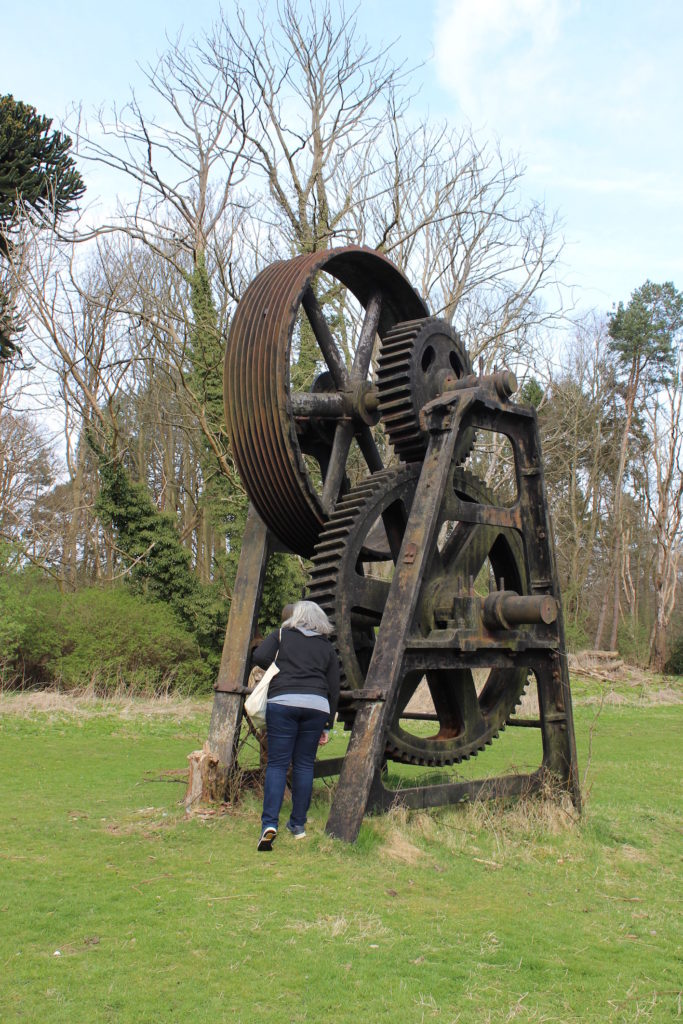 As the investigation gathered urgency, our second crack team of ears on the ground assembled in Belmont Street in a downstairs room at Seventeen, a space for new and emerging artists run by Aberdeen city council. It also happens to be the former site of the much cherished One Up Records, which closed in 2013, what better place for an eavesdropper gathering?

On arriving in the space, this was further confirmed by the unrivalled views of Union Terrace gardens. This is an area that, since watching Fraser Denholm’s documentary film, Run Down Aberdeen had been on our radar.

Artists with distinct and varied eavesdropping credentials arrived and once assembled were keen to accept acoustic missions in the immediate vicinity.

If you are going to hold an acoustic consultation in this city, or indeed any kind of light crime fiction inspired business, you had better head to Slain’s. Slain’s is a bar-cum-theme park experience slap bang in the middle of Belmont Street. No, actually it is just a bar. However, there are many booths and high-backed chairs with arm rests that seem somewhat reminiscent of a ghost train, or fairground ride. Yet, there are two differences: first nobody squirts you in the face with water and second, the seats don’t move. Johanna and I set up a temporary HQ next to the pool tables and checked in with team members at previously agreed times to discuss their findings. 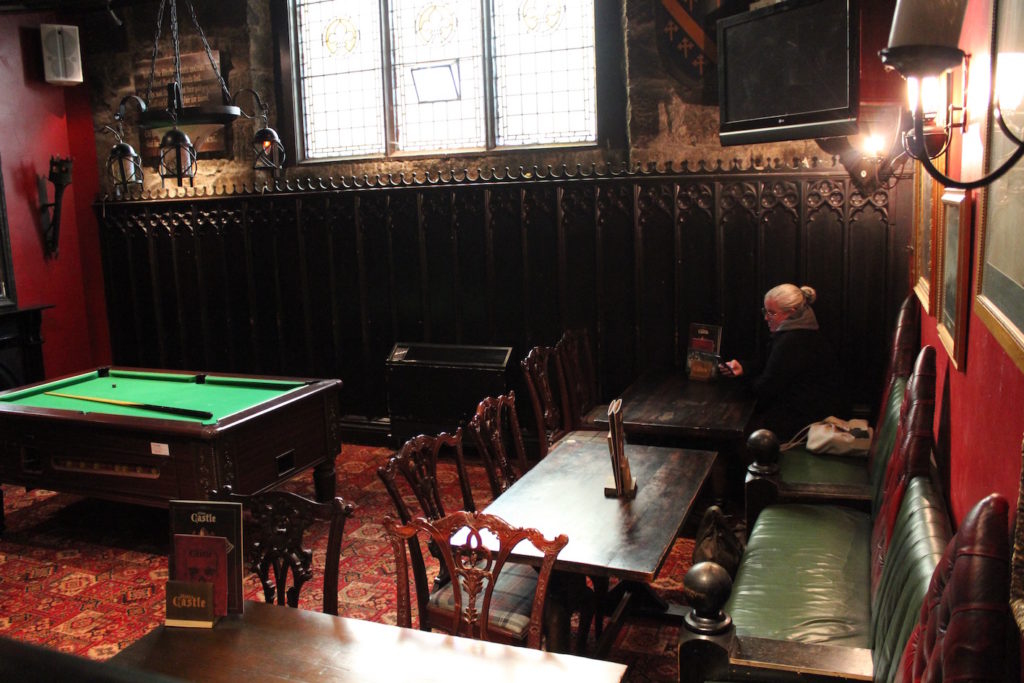 Slain’s Bar, the ideal location for an acoustic consultation, or any light crime fiction inspired business.

Back at HQ for the debrief, once again, our agents on the ground surpassed our expectations, this time offering valid insights into the location of CCTV cameras, the use of hats to extend acoustic capture and a highly-sophisticated appreciation of the social, physical and economic properties of sound. 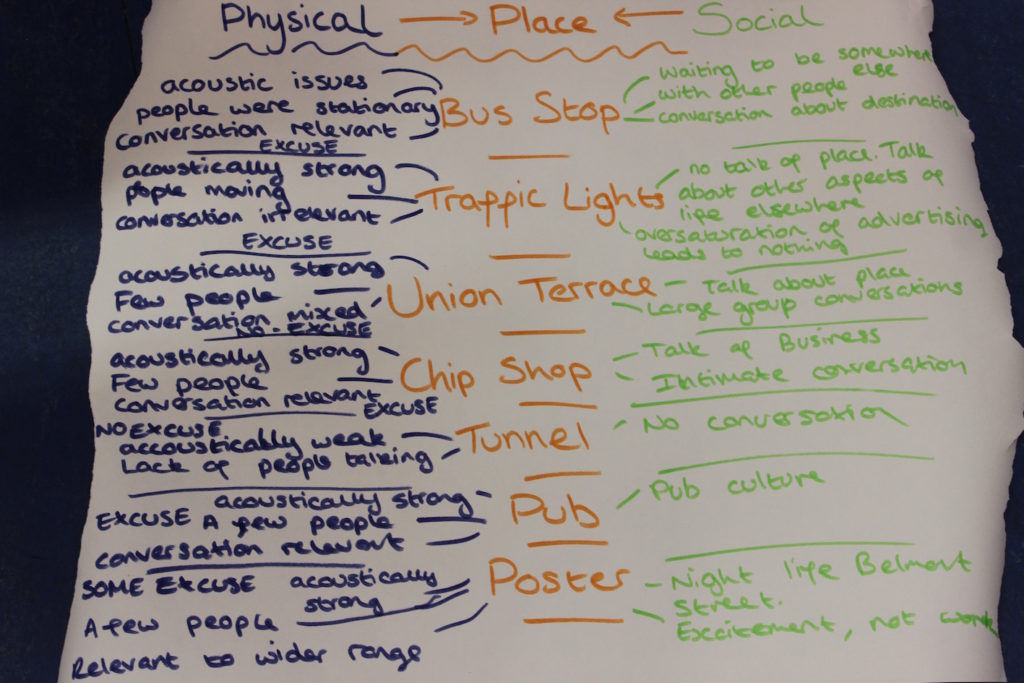 Highly detailed analysis from our ears on the ground.

“We lifted bodies from their graves,

We used our strength,

We used our wits

We sold them onto Doctor Moir,

So he could cut them into bits”

The words to The Kitchen Cynics The Resurrectionist’s Song had been on loop in our heads for some time and having met Jim at the Spectra conference back in February, truly felt that The Anatomy Rooms would be the ideal place to gather further acoustic intelligence. The Anatomy Rooms are at the back of Marischal College and as the name suggests, the site of the former anatomy department. It is now a creative hub providing working spaces, events, artist studios and support for artistic activity in the city. A true marvel. Johanna and I are kind of obsessed with creeping around the space, which has been dubbed the future Café Oto of the North, and imagining large-scale future performance events.

The team assembled around a wooden table in the somewhat cosy kitchen space and had barely sat down when they were issued with their first individual mission, an audio scavenger hunt of their immediate surroundings. After exactly twenty minutes, all returned with detailed but similar accounts of the soundscape providing an acoustic map of the immediate zone. One comment about seagulls being the ‘barbarians of the city’ resonated strongly. Gulls had been prevalent ever since our arrival in Aberdeen, from reading the local press we had learnt that Arctic Gulls could be the size of a dog. We were also mesmerised by CCTV footage showing a Gull trying to enter the Belmont without a ticket.

Sent out on their second mission in small groups, acoustic consultations took place in the Carmelite hotel accompanied by the rhythm of live jazz from the grand piano and the acoustic potential of unopened champagne bottles.

By way of offering to the investigation, this team put forward an installation that activates by the dropping of random events (in the shape of fluffy pompoms) onto the site and a score for 8 sonic happenings around the city. 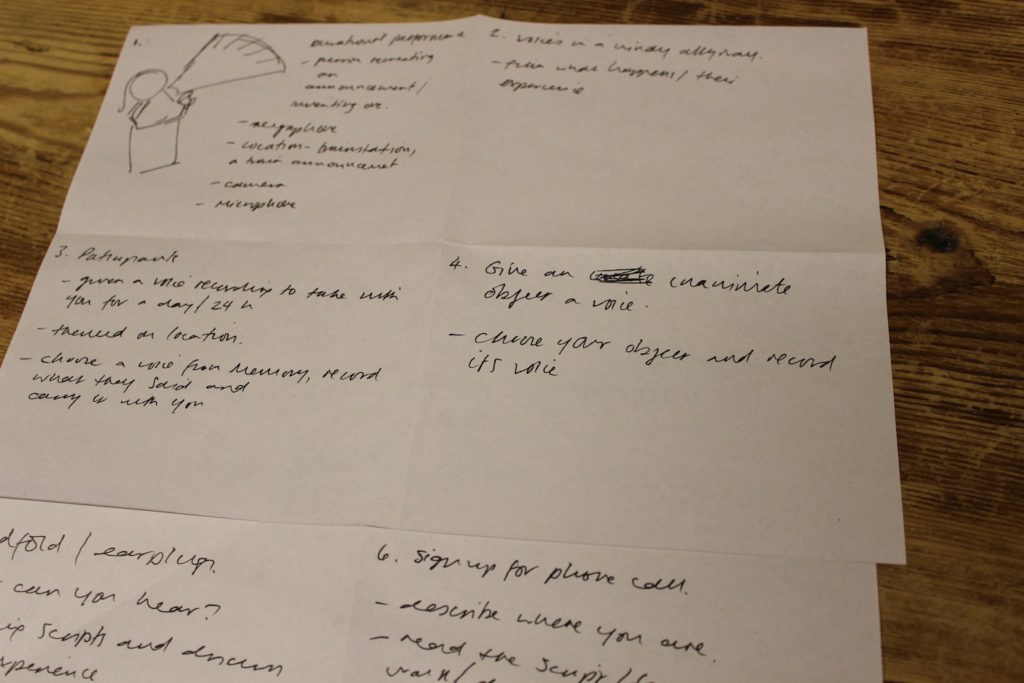 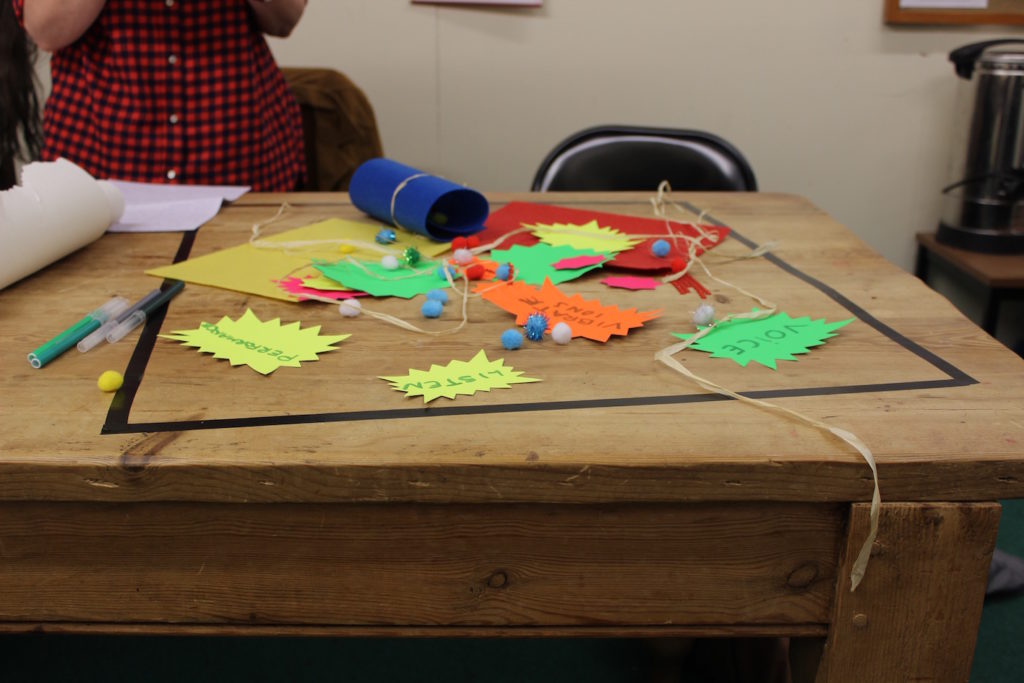 Installation activated by sonic events in the shape of fluffy pompoms