Listening in on Seaham with the East Durham Artist Network

Rebecca and I were sitting around a table with Jean, Jac, and Jean, and we got so carried away by the conversation that almost without our knowledge, we discovered that not only was a sunrise session on the Blast a good idea, it was a necessity. 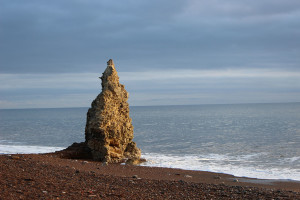 Jean Spence, Jac Howard, and Jean Lowes are three of the key members of the East Durham Artist Network (edan). The group occupies a site on Church Street, the high street of Seaham, at the end nearest the sea. The space is a converted public toilet, and it matches both the hard-core ambition of the group (they put on ten exhibitions a year, and they are open to the public five days a week with an all-volunteer team), and the group’s pragmatic and unpretentious approach.

We had requested a meeting with edan because part of our project proposal mentioned the development of a ‘community of listeners’ and these people seemed a very likely bunch to help us draw near this elevated goal. We wanted to run a workshop with edan and their wider membership on a sort of reciprocal basis. On the one hand, we had a set of ideas and frameworks that we thought were (are) really interesting, and if we shared them, we hoped they might think so, too. On the other hand, we needed access to local expertise and ears on the ground and participants willing to engage in conversation and exchange. 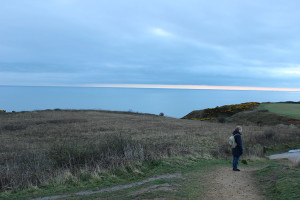 The Blast Beach is the site of a former waste coal dumping site, though in recent years with clean up efforts much of the pollution has subsided, and it’s become a recreational spot. The industrial past is visible in the contours of the cliffs and the mineral coloration in the sands. On Sunday, 10 April, we met five members of edan at 5.45am to watch – or rather to listen – to the sunrise over the Blast. For several of the members, morning sessions on the Blast are a regular practice, to paint or write or photograph. Rebecca and I offered a few prompts to direct attention to the aural, and for close to two hours there was a period of intense listening. 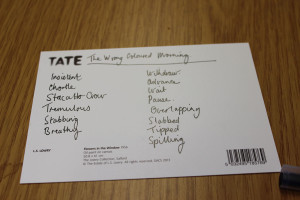 Later that morning, seven more people joined us at the Art Block (the name of the site edan run on Church Street). In this second session, participants undertook acoustic investigations of the high street, the beach promenade, the harbor, the shopping centre/Asda, and the Londonderry offices (the buildings where the Victorian industrial bosses ran their business. It was the police station for a period, and has recently been converted to luxury flats). We asked participants to make a sound inventory, documenting what was happening in their location, as well as what had happened in the past, and what might happen in the future. Local councilor Sonia Forster took a voice recorder on her investigation and conducted impromptu interviews with people in the pub, in a nail salon, on the street. We reconvened at lunchtime for ham broth with dumplings, provided by Tonia’s Café down the road.

The detailed conversation that followed was, for Rebecca and I, an invaluable resource for our ongoing investigation. Participants spoke about the shifting sonic landscape in Seaham, often from the perspective of a lifetime’s worth of memories of this area. These reminiscences stretched from a time when the rhythm of the coal pits scored daily life, and the foghorns drifted in off the coast, to now when participants complained about the sounds of the traffic created by a newly developed tourist population heading for the ‘regenerated’ marina or searching for sea glass on the shore (remnants of the Londonderry Bottleworks). 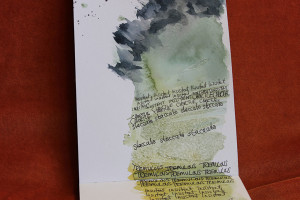