A swarm of red herrings 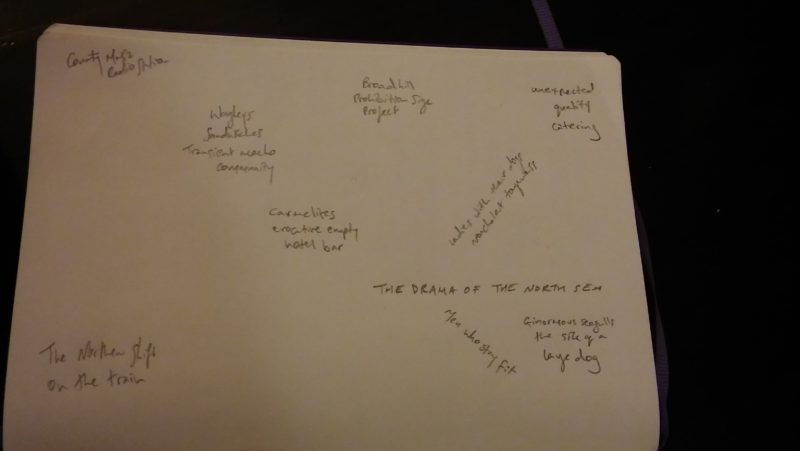 I took a cab from the airport, and the radio was tuned to a station playing 1970s American country music. I’ve heard Aberdeen described as Little Houston, but this seemed really on the nose. Don Williams’ ‘Living on Tulsa Time’ came on. It would be in my head all week, a phantom soundtrack to our other aural pursuits.

On the way from the airport, I got a text about the flat we were staying in, with instructions to look for the buzzer labeled ‘Alan’. This gave both Rebecca and I a jolt, as we decided and felt that it could only be a reference to a central character in Stewart Home’s 69 Things to Do with a Dead Princess, an experimental novel set in Aberdeen, with excursions to stone circles in the surrounding shire and to the whisky distilleries in Islay. This description makes the novel sound pastoral or gentle. In fact, 69 Things is pornographic and hallucinatory, and unpleasant and funny. Critic Jenny Turner also notes that ‘[t]he eateries and supermarkets of Aberdeen are visited, and rendered, as far as I can see, entirely accurately’ adding ‘I come from Aberdeen, which is how I’d know’. Rebecca made a list of places mentioned in the book, and we made a few efforts to visit them, but with nothing like the dedication shown in 69 Things to recreating the (fictional) author KL Callan’s journey with the corpse of Princess Diana through the countryside of Aberdeenshire (part of a planned cover-up of her murder).

This early in the investigation, it is difficult to know what is an essential clue, and what is – as Rebecca says – a swarm of red herrings. I have a memory of reading a novel by the Aberdeen crime novelist Stuart MacBride, at a time in my life when I was commuting regularly between London and Bristol, and had a private ritual of buying a mass market paperbacks at the WH Smith at Bristol Temple Meads station to read on the train. These were often ultra-violent. I don’t know why I was drawn to that – I haven’t performed the necessary self-examination to find out, I guess. The MacBride novel could compete on the violence scale, but apart from one scene with the main police detective that takes place on the side of a highway, I don’t remember much else about it. I have less stomach for aestheticised gore now, and feel especially unprepared to enjoy serial killers who prey on women (and particularly sex workers).

Rebecca and I have been dipping into crime fiction, though. Ian Rankin’s 1997 Black and Blue is set partly in Aberdeen, focusing, maybe inevitably, on the harbour and the offshore oil rigs. We have also made a detour to the Shetland Islands, via Ann Cleeves’ Inspector Perez novels, which are deeply absorbing and speak to the truth of the cliché that the main character of a lot crime fiction is a place. They are also part of a sub-genre of crime thrillers, which might be described as ‘small town in which the leading cause of death seems to be murder’ (the exemplary series in the sub-genre being Agatha Christie’s Miss Marple novels, which could be read as portraying white, middle-class Middle England as culturally disposed to sadistic homicide).

The novels of Nan Shepherd are almost certainly key to our inquiry. I’m sure we will write more about these as our time in the North East goes on (and as we finish Shepherd’s Grampian Quartet), but I’ve been thinking a lot about the first novel in the set, Quarry Wood (written in 1928 but set before the First World War), and it’s treatment of the coming-of-age theme. On the one hand, the protagonist Martha’s quest for knowledge is a process of expansion, even imperial in form (‘…she had seen new countries, seen – and it was this that elated her, gave her the sense of newness in life itself that makes our past by moments apocryphal – the magnitude of undiscovered country that awaited her conquest’). On the other hand, her achievement of maturity lies in her development of the capacity to approach contradiction and incompleteness, which in turn allows her to grasp that knowledge lies in the relations between things. Her friend Luke writes a poem about the Archangel Gabriel coming to earth (a poem which remains crucially unfinished). A key line describes the angel’s motivation: ‘For though he had learnt the All, and might not tire/ Of knowing it, he knew not yet the whole/ Of those inconstancies and alterations/ that dwell resolved in God.’ The poem signals a dialectic tension in the book between the All and the part, which is not resolved but constitutes the movement of the text. There is a feminist politics in this tension. After a period of suffering in the wake of a developing and unrequited passion for the married Luke (during which her lust for knowledge becomes deeply embodied), she has a moment of revelation.

‘I’m an uncompleted work of art. My creator has flung me aside’. But stung suddenly by the admission the thought implied, ‘Good Lord!’ she exclaimed. ‘Am I such a slave as that? Dependent on a man to complete me! I thought I couldn’t be anything without him – I can be my own creator’.

This revelation may be less about self-sufficiency and wholeness, however, than it is about struggle as a form of agency. Later, as Martha recovers from the emotional storm, and as she nurses her dying Aunt Josephine, she reflects that:

the shame that had torn her was as wrong as her resentment against Luke; and that the shattering of her selfhood was not evil, but the condition of growth. She had given love and had received only adoration: and love is so much bigger a thing than adoration – more complex and terrible. At its absolute moments it holds resolved within itself all impulses and inconsistencies, the lust of the flesh, the lust of the eyes, the pride of life, the spirit agonising. Martha seemed to herself that morning to touch one of its absolute moments. She had no more fear of what love might do to her.

The resolution that love offers isn’t one of harmony, but of the totality of often contradictory or irreconcilable relations. Agency is developed not through smoothing over or ignoring these relations, but recognising oneself as part of them.