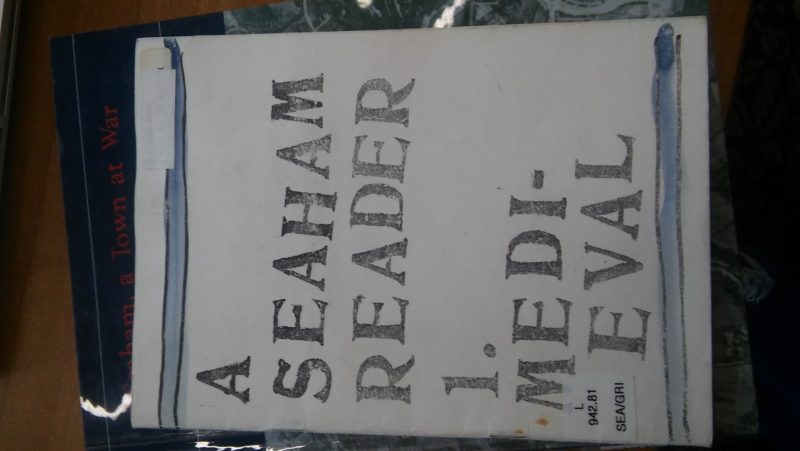 We spent a day at the Palace Green Library at the University of Durham, reading local histories of Seaham – pamphlets and paperbacks (either council-sponsored or self-funded) written by passionate and knowledgeable residents for little or no remuneration. We soaked in the details. We indulged our archive fetish. We admired the pamphlet as a form of publication, its efficiency and confidence.

A significant proportion of the pamphlets were written Bill Griffiths, and published by an imprint called Amra, which sometimes listed its corresponding address in Seaham and sometimes in London. Amra was Griffiths’ project and Griffiths himself was a figure of the British Poetry Revival in the 1970s in London, and moved to Seaham in the 90s to escape what had become for him an inhospitable, Thatcher-ravaged city. In his late forties and fifties he entered a phase of huge productivity as a local historian and scholar of North East dialects, Old English, Old Welsh, Anglo-Norman, Medieval Latin and Old Icelandic until his death at 59 in 2007.

He wrote a series of pamphlets called A Seaham Reader with volumes dedicated to the mines, the 3rd marquess (Lord Londonderry, founder of Seaham Harbour), the medieval, ‘yearly bonds, etc.’, the harbour, and Seaham Hall. In an interview with Bridget Penney and Paul Holman, he says that these pamphlets were ‘designed to counter the view that Seaham is entirely the product of the 3rd Marquis of Londonderry and the Church of England’.

Griffiths’ commitment to a peoples’ history of his adopted town is found elsewhere, too. In a review of a local history publication (The Mythology of Seaham: Review of Tom McNee’s Local History Publications), he pulls apart author Tom McNee’s assertion that Seaham Harbour was ‘conceived, created, developed and controlled continuously by one man, his wife and successive members of his family’. Griffiths’ response is:

While the 3rd Marquis may have had good qualities, conceiving, creating, developing and controlling do not seem to have been among them. The idea of Seaham Harbour was devised by the Milbanke’s (sic) not the Londonderry’s (sic) (perhaps by Milbank’s agent Wm. Taylor); the practical work was organised by agents like Buddle, not Londonderry; the finances were guided by the trustees of Frances Anne’s money, not Londonderry (see Sturgess in Archaeologica Aeolian, 1982); and the manual work done by labourers, for Londonderry, as far as I know, never went near a machine or down a pit in his life (he seems to have had a phobia that he might not get out again). Londonderry’s contribution to the enterprise was his wife’s money, and his own name and connections, that enabled him to raise further large loans e.g. from public funds. As to his decision-making expertise — “he will take the advice of any knave or Fool who will pandor (sic) to his one-sided, selfish views” (Buddle – Londonderry’s own agent/viewer! – quoted p. 26 in A. J. Taylor’s article in the Durham University Journal n.s.17 (1955-56) 21-27). Aristocrats, I suggest, seldom create history single-handedly. (p.3-4)

We were very taken with this analysis, which resonated with our own idea about listening and eavesdropping as a practice which figures public space as necessarily collective. We were then particularly delighted to discover a series of ghost stories Griffiths wrote called Ghost Tales from Seaville, set in a thinly disguised Seaham, with eerie or melancholy events used to structure a critique of top down ‘regeneration’ efforts. One story involves a young journalist who has allowed herself to become a mouthpiece for private interests. One day while writing a story in support of the  development of the Londonderry offices into luxury flats, an old councillor tells her that it’s bad luck to write prose on a Friday morning. She ignores him, and is haunted for the rest of the morning by a song with no discernible singer. Later that afternoon, the councillor is felled by a heart attack, just before he is meant to be singing sea songs at a charity benefit.

Here are some links to ghost stories by Bill Griffiths.