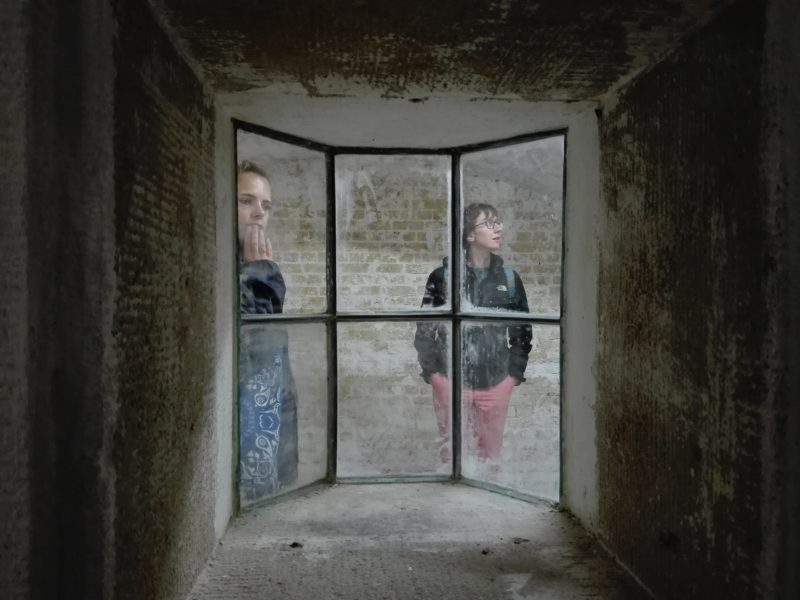 An over-sized chandelier hangs from the ceiling in the lounge area at the Orwell Hotel in Felixstowe. Individual segments of crystal vibrate gently reacting to the weight of those who walk on the floor directly above. A large crack running the length of the ceiling indicates the long-term structural damage which can be caused by an affinity for overheard conversations. We take note.

We occupy the lounge; some of us on the finely upholstered chairs: Laura Ashley print sofas and others on the deep pile, heavily patterned carpet. We overhear the receptionist deal with a series of complicated requests. One involves a complaint about a missed wakeup call and an erroneous room number.

“You can never please everyone, can you?” she says.

We overhear a group of elderly school friends discuss the past, sharing photographs and memories. We hear discomfort; a hip joint giving way; the creaking of old bones; a series of heart valve operations and renewed relationships with gravity. One of us reads a magazine article about how to disinherit your children. The youngest one of us, E let’s call her, carrying a binaural recording device in the shape of a prosthetic ear, slips out and rides the lift to the first floor. A man enters the lift asks her why she is here.

“I’m part of a sonic detective novel” she replies.

“Oh, I’m here on business.” He adds, clearly not listening to her, or not hearing.

E has a real ear for detail. An expert in data sonification, she once attuned herself to the sonorous properties of Thomas Gainsborough’s hand. We had all been sat around a long table sharing a tandoori takeaway and a few bottles of chianti at the Think Tank, our Ipswich HQ when E told us this. Like E, the rest of us had also put all the noises in our cacophonous lives temporarily on mute. We were here to turn our attention, for four glorious days, to the investigation; to the Suffolk coast.

We had done it, we thought. We had finally assembled the whole team. We assigned everyone a code name in the form of an initial, E, N, O, D. Elated to find this spelt DONE backwards we were busy congratulating ourselves with backslaps and high-fives when G strolled in, slightly behind schedule (the pleasures of the British rail service), reminding us we were far from completing the mission.

Our agent, O had just flown in from France, keen to get started she let us listen to her latest ‘acoustic ballade’ made specifically for the Suffolk coast case. We heard the sound of solitary workers; the voice of the man who didn’t want to be King; the rising floods of 1953 and the low rumour of the sea. She said we needed to hear the past to understand the present, that if we listened we would hear how history is full of the muted hopes and dreams of yesteryear.

We agreed again by nodding, our cheeks bulging with food and our hands busy with the business of interchanging ripped up corners of nan bread for onion bhaji’s as we continued feasting on the Indian takeaway. 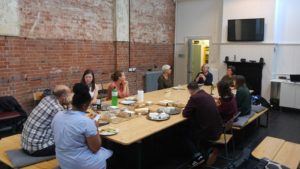 Our investigations along the coast of the UK to date led us to believe there was key evidence in East Anglia. We had felt the pull South all the way up the coast in North East Scotland. If asked about the investigation, when pushed, we could all agree on three things.

One, that the event was clearly ongoing. Two, that it was not one single event and

three, that the unresolved circumstances were reverberating ever more loudly and with greater intensity since the UK announced its intended departure from Europe.

We really had our work cut out. We had issued a call. The team had responded. It was all going incredibly well. Too well.

In Ipswich we discovered, quite by chance, that the mission coincided with the annual Ipswich Heritage Open Days (when buildings of significance are open to the public). To cover more ground, we decided to split up and spiralled off in several directions, one ear to the ground, attuned to our surroundings at all times. At least, that was the theory.

G slipped into the Christchurch mansion. Here, surrounded by grandfather clocks she contemplated the weight of time and the rhythmic structures of sound as a rule on 16th Century architecture. A place full of history and memory, yet a place where time still runs.

“No one, no thing escapes time” she had said, a look of nostalgia upon her face.

Meanwhile, at the Willis Towers, home to a global advisory, broking and solutions company where risk is turned into growth, N was convinced she had found the originating source of the event. She attuned herself to several large metal structures on the roof garden. Deep in meditation she overheard a man visit a memorial bench dedicated to a lost loved one. Desperate to see the bench and sit with his loss, he had asked those occupying it to move for a moment. From the corner of her eye, N could see the contents of a discarded tomato sauce sachet on the arm of the bench. She made a swift exit passing groups of children performing handstands and felt the levels of awkwardness rising within her.

In Felixstowe, the team stuck together, silently drifting between the town and the beachfront where a 5km charity race was finishing and a man was walking with seven dogs. En route to the Port of Felixstowe one of us stopped to eavesdrop on a tree swaying in the wind as a cover, we would discover later, while the movement of the group was recorded by a CCTV camera attached to a nearby residential property.

We ordered the tug driver’s breakfast at ‘The Viewpoint Café’ and watched a container ship, pulled by several tug boats, dock into an unloading bay. We finally broke our silence by checking the planned itinerary of the vessel on the marine traffic website. Last port? Rotterdam. Next port? Rotterdam. No surprises there then we thought. Must be a red herring.

The volunteers at the Martello Towers, the disused HM coastguard station welcomed us with enthusiasm. They seemed pleased to have some extra eyes and ears along the coast, even if we were only in town for a few days. We were upskilled in coastline safety features, marine radio communications and used the super strength binoculars to look at the principality of Sealand, an offshore platform originally erected in WWII, 12km from the Suffolk Coast. Once a haven for pirate radio, attempts were made to establish Sealand as an independent sovereign state by loop holes in UK legislation. 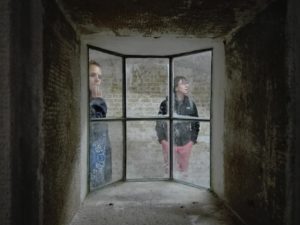 As the weather closed in around the tower the radio crackled into life with requests for larger lifeboats. Unsure what to do with all these extracts of information, we excused ourselves and made a swift exit. We drifted along the street outside trying to figure out how to get further north on local public transportation services. Dithering with our phones, our attention was drawn to the patter of footsteps coming from behind us. We paused momentarily and turned around. A dog holding its own lead in its mouth had latched on to the end of the group. We motioned to the dog and its owner to overtake us, aware that their speed was faster than our own. The dog refused. The owner tried several times but the animal refused. We carried on like this all the way back to the Orwell Hotel.

“It’s like we have come full circle” one of us said.

“I feel like we are just chasing our tail.”

We continued to make puns until we noticed D had been stood with her fingers in her ears, possibly for some time.

D worked in many interesting circles and had an affinity for cubist compositional strategies yet was also a quiet expert in the diaries of Derek Jarman. More recently she had become concerned with questions around silence and entitlement.

She said that patterns were emerging. She spoke of attunement, of red herrings, of extracts and the abstract. It sounded familiar, so we listened. She said we needed to find a quieter place if we were to solve this. We all agreed and decided it was time to head further up the coast just outside of Aldeburgh. D had some contacts there who knew a lot about acoustics, about noise and presumably about silence too. 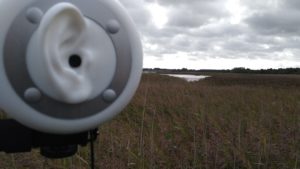